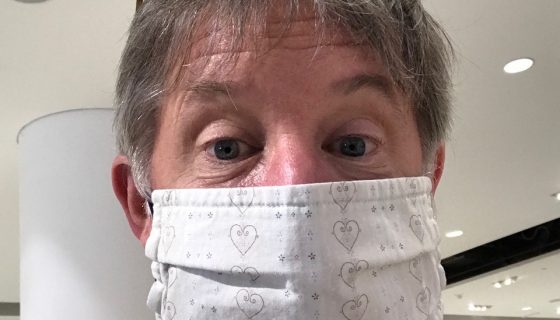 Rev. Chuck Harris serves Messiah, its members, friends, and neighbors, as Senior Pastor. The primary focus of his work is in Word and Sacrament Ministry, Adult Faith Formation, Staff Development and Leadership, and Finance and Stewardship activities.

Chuck began his service at Messiah and in the Auburn community on November 1, 2015. Messiah is the fifth parish in which he has worked over the 28 years of his ministry in the Puget Sound area. His previous ministry locations were in Tacoma (twice), Port Orchard, and Olympia.

Chuck grew up in Astoria, Oregon, a town he describes as "more than just slightly haunted." He loved the connection he experienced to the ocean, forests, and mountains of Oregon's coastal range. There, he knew multiculturalism through the interactions of Finns, Swedes, Danes, Norwegians, Icelanders, and Germans.

When Chuck graduated from Astoria High School in 1983, he was accepted to and attended Pacific Lutheran University in Tacoma, WA. After graduating in May of 1988, with a double major in History and Religion (and a minor in ancient Greek on the side), his multicultural experiences had broadened slightly to include most of the rest of northern Europe.

Chuck's seminary career was spent at The Lutheran School of Theology at Chicago, a seminary of the Evangelical Lutheran Church in America (ELCA) on the city's south side. From 1988 through 1992, his experience of race, cultural, gender, sexuality, and social/economic realities grew exponentially. Without a doubt, the complexities of being a white, male, heterosexual of northern European descent, with a fair degree of privilege, were just starting to become apparent to him. He did, though, manage to graduate with an MDiv degree and was ordained in July of 1993.

Throughout the years of his ministry, the work of creating a variety of of seasonally connected worship services, transformative faith formation experiences for adults, and healthy, dynamic, and adaptive congregational cultures has (and continues to be) Chuck's passion. It has never been simple or fully realized work, but the insight of Jesus seems more true to him than ever: "The kingdom of God is as if someone would scatter seed on the ground, and would sleep and rise night and day, and the seed would sprout and grow, he does not know how." (Mark 4)

Chuck is blessed to live with his family in Normandy Park, a small, wonderfully quirky community nestled along the shores of Puget Sound, somewhere south of Burien, north of Des Moines, and just down the hill from SeaTac International Airport. He mourns the close of his neighborhood gym, where he was a Les Mills BODYPUMP group fitness instructor. His retirement dream (way down the road) is to open a small gym, create an amazingly welcoming environment, and teach group fitness well into his 90s.

His journey through life continues to be filled with crazy wonder as he travels together with Kirsten (spouse); Thomas, Katherine, and Keegan (kids); Oscar (Golden Doodle); Tiki, Tili, and Tizi (cats);  Nardo (Red-footed Tortoise); Fluffy (hamster), and numerous aquarium fish and frogs (present and past). As a whole, they make up a great cloud of witnesses to the joy of life and God's amazing patience, grace, and unrelenting humor.